The building we are currently operating from has a rich and interesting history, as does the rest of the city. El edificio de la Equitativa or the building of the Equitatvia was once a Palace of classical courts. During the civil war the Palace served as Falangist barrack. Flananism being a political ideology which ,during the Spanish Civil war, became an authoritarian, conservative ideology connected with Francoist Spain. It was built at the beginning of the 20th century on the grounds of the Huerta de la Alcoba. It is very likely that it was constructed around the same time as the neighboring Palace of Yanduri. The building was later acquired by ´La Equitativa´an insurance company who hired a regionalist architect called Talavera. He had already practised some rationalism through his construction of the house Lastrucci. Talavera was tasked with adding greater height to the building. His style highlighted the building´s double arch lookout. Giving it a similar look to building towards the San Telmo bridge and the Cristina Gardens.

El edificio de la Equitativais now the current work place of Voyager. We have offices on both the ground and the first floor of the building. Other companies also reside in the building including a law firm and a Otolaryngologist, a doctor specialising  in the ear. To put the size of the building into context, along with having the three companies, which work across four floors, there is also room for six high-end apartments. The building of the Equitativa overlooks the beautiful Puerta de Jerez, one of Seville’s biggest pedestrian squares. The square acts as a gateway to some of the main  attractions the city has to offer. In the centre of the square is the fountain of Seville. It was originally built in 1929 by Manuel Delgado Brackembury. He used children that lived within the vicinity of his workshop as models to base his construction on. That´s why sculptures of children can be found on the fountain. However, due to construction of the metro lines between 1974-1983 the fountain was dismantled. After construction of the metro lines had finished, the fountain was reconstructed  and slightly modified with some of the exterior sculptures not replaced. 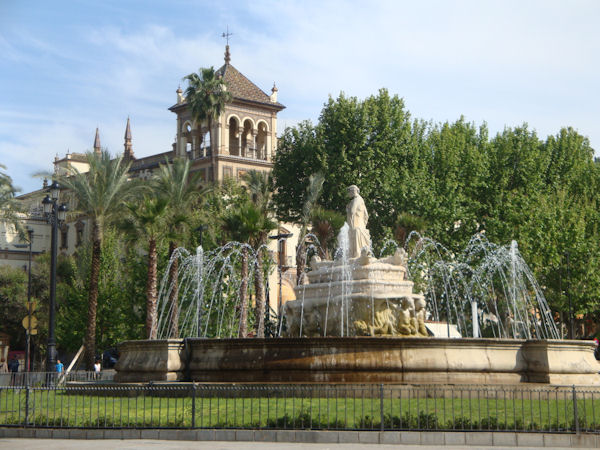 Our address is: Puerta de Jerez, 2, bajo b, 41004 Sevilla so feel free to come and visit us from 10am to 6pm Monday to Sunday and book one of our fantastic tours, or contact us here: https://voyagerseville.com/en/contact/

The restoration of the pillars that served as an entrance to the Ibero-American Exhibition of 1929 began a few days ago. The […]

The organizers of the “III International Conference: Collecting, Patronage and Art Market” in Europe, America and Asia welcome you and call researchers, […]

The Royal Alcazar is a beautiful place that takes you back to the past, during the time of legends. Its powerful magic […]