The Giralda Tower, a true icon of Seville. Towering over the central district, it´s very hard to miss and a great way to finish your tour of the Cathedral. It´s impossible to glaze upon it without experiencing a completely euphoric state of appreciation. But the Giralda Tower has a much richer history than you may initially realize. If you look at the 4 main stages of the tower, they look like completely different buildings! The first stage described below is the initial construction, The tower was firstly constructed as a minaret for the Great Mosque of Seville in Al-Andalus which was completed in 1198. This was used as a call to prayer, and originally the Minaret of the former mosque was crowned by three golden spheres that fell and disappeared in the 16th century after an earthquake but the upper portion of La Giralda was replaced with a Spanish Renaissance style bell tower in 1568.

After Seville was recovered by the Christians in 1248 during the Reconquista, the city’s mosque was symbolically converted into a cathedral and so the Giralda became Christian too as a cross was mounted to the top of the tower.  Despite mass reconstruction, two parts of the original mosque were preserved: the Moorish entrance and the Giralda Bell Tower. The La Giralda Bell Tower can be accessed from  an entrance inside the cathedral. Built without stairs, the interior of the tower gently spirals upward with a series of  35 ramps and was wide enough for two men on horseback to pass each other.Those who have been brave enough to scale the 343 ft climb are rewarded with what is undoubtedly the best view in Seville. So book a flight and witness the stunning cathedral, the third largest in the world, and subsequently the ancient Giralda Tower, soaking in all it´s history.

Sevilla FC are a very well respected and talented football team. They play in the highest division of Spanish football, La Liga. […] 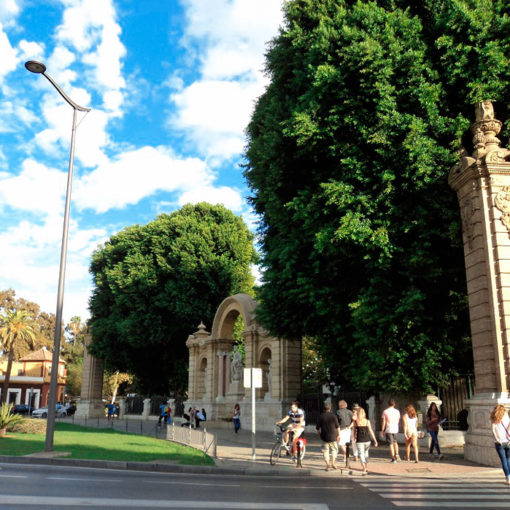 The restoration of the pillars that served as an entrance to the Ibero-American Exhibition of 1929 began a few days ago. The […]

In 1519, Ferdinand Megellan a Portuguese explorer travelled 42,000 miles with 5 ships and 270 crew members to discover the Western Sea […]

One of the most famous landmarks in Seville is the Giralda Tower. Since originally built in Moorish times, it received many alterations […]