In this article we are going to take a tour of the history of Seville. Recalling some important women who contributed ideas, demonstrated their effort and dedication to what they worked for and believed in.

Doña Guiomar was a woman who lived in medieval times in Seville. Although he did not live in a noble family, he got the same respect and admiration; all thanks to your kindness and dedication.

Among the works he carried out, the following stand out: paving the first streets of Seville with his own money, even before the city council did it. Donate money to restore the prison, and thus improve the lives of prisoners. On the other hand, he offered people salt pans so that they would have the necessary amount of salt, also favoring the development of livestock.

She was a sculptress from the Baroque era and is the daughter of the sculptor Pedro Roldán. Both she and her brothers worked in the father’s workshop, where they were in charge of tasks such as making designs and even carving them; that was how she earned recognition on her own merits and rose in social class. When she had her own workshop, she began to receive commissions from churches and brotherhoods in Seville and Cádiz. She ended up becoming a direct competitor of her father. Luisa Roldán was an independent woman with a strong personality, but like many other artists, they enjoyed fame and ended up in poverty afterwards.

Cecilia was better known as Fernán Caballero. She was a writer and dedicated her life to transmitting her feminist and environmental ideas; she fought for liberation and defended the progress of women. Cecilia’s parents influenced her education, since she grew up in a family environment where intellectuality was valued; however, due to the stigma of the time about women who were dedicated to intellectual activities, she had to adopt and assume the pseudonym of Fernán Caballero to be able to write without being affected by social barriers. Some of his works are: The Alcazar of Seville; Tales, riddles and popular sayings, The star of Vandalia.

Catalina de Ribera was an Andalusian noblewoman, from the house of Ribera, and she is considered the founder of the Hospital of the Five Wounds. The construction of the Casa de Pilatos and an extensive reform of the Palacio de las Dueñas, considered the two main noble residences of said city, are also due to him.

In 1921, the decision was made to create a fountain dedicated to her, below which is the following inscription: “To the egregious founder of the Hospital de las Cinco Llagas, Doña Catalina de Ribera y Mendoza, loving mother of the poor to whom she gave her heart. and his riches.”

Maria Galiana is a Spanish actress, well known and respected in Andalusian theater and Spanish cinema as a supporting actress. Before her jump to acting, she was a high school teacher; He graduated in Philosophy and Letters, specializing in History, and taught History and Art History at public institutes. When she retired in 2000 she also won the Goya for Best Supporting Actress for the film Alone; however, she is popularly known for her role as Grandma Herminia in Cuéntame qué pasa.

In Montequinto, a neighborhood of Dos Hermanas (a city near Seville), there is a public institute with his name.

Pilar Manchón has a doctorate in computational linguistics from the University of Seville, in 2003 she co-founded, together with Gabriel Amores, the startup Indisys (Intelligent Dialogue Systems) dedicated to voice recognition and the creation of virtual assistants. Years later Intel took over the company and she became part of the innovation and development management team. In 2016, Amazon signed her as director of cognitive interfaces.

Marina is a professional athlete, Olympic, world and European champion in the specialty of windsurfing. At the Beijing Olympics in 2008 he placed fourth, and later won the gold medal in London in 2012, and in Rio in 2016 he came in fifth position.

Elena is a Spanish composer, specializing in instrumental chamber music and musical theatre, who grew up in a cultural environment and from an early age was clear about her vocation. He studied German philology in Seville, and piano and composition at the Superior Conservatory of Music in Zaragoza. She is currently a professor of composition at the University der Künste in the German capital and combines teaching with composition. Among the awards he has received are the National Music Award in the Composition modality (2010) and the Musikpreis Salzburg in Austria (2011). 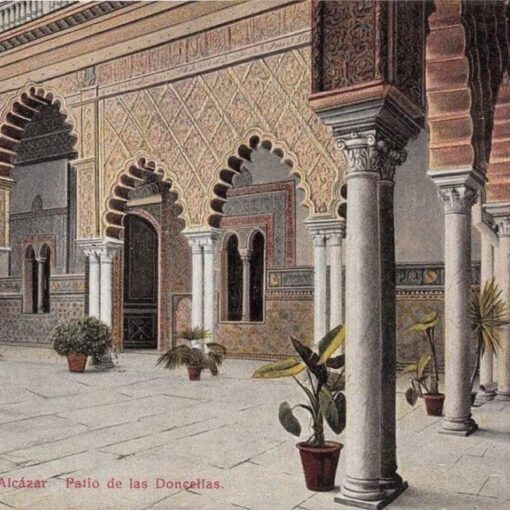 It is indisputable that one of the most iconic monuments of the capital of Seville is the Real Alcázar, and within this […]

The biggest TV show of the 21st century, Game of Thrones is a fantasy televisión revoloution, transporting viewers to mythical lands of […]

Born into a noble Portuguese family around the year 1480, Magellan became idolised after orchestrating the Spanish expedition to the West Indies […]