The biggest TV show of the 21st century, Game of Thrones is a fantasy televisión revoloution, transporting viewers to mythical lands of wizards and dragons. And despite the televisión show apparently being finished (it´s probably coming back) everyone´s at different points in the series so don´t worry we´re not going to spoil anything. The producers of Game of Thrones took advantage of the beauty and mythicality that Sevilla holds, with a trip you can visit every monument that appears on screen.

The Real Alcazar is a stunning gem in the heart of Seville, the oldest and most complex royal residence still in use, a trip to the Alcazar is bound to be breathtaking. This is why the producers of Game of Thrones shot huge chunks of the programme in the Alcazar. The Alcazar’s royal palace portrays the Water Gardens of the southernmost of the Seven Kingdoms, ruled by Doran Martell. It can be seen in all it´s glory in the 5th episode of the 5th season. The rooms and areas which appeared in the series are: Mercury’s Pool and the Grotto Gallery; the Ambassadors´ Hall; the Baths of Maria de Padilla; and the gardens, including the Pavilion of Carlos V. Prince Doran receives Jaime in the Ambassadors’ Hall, along with Myrcella, Trystane and Ellaria. A later scene shows Ellaria reluctantly swearing allegiance to Prince Doran, with the Patio de las Doncellas behind. The Salon de Embajadores, meaning The Ambassadors Reception Room”, was the main room that King Peter of Castile used for his stay at the Alcazar. This room was the most richly decorated within the entire Alcazar Palace, which was in keeping with its role of power. In 1526, Emperor Charles V and Isabella of Portugal celebrated their marriage in this room. 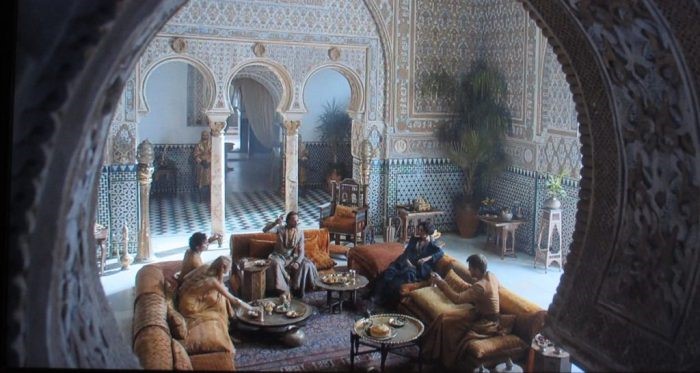 HBO is filming scenes for the eighth and final season of Game of Thrones are the Roman ruins of Italica, which fans know best as the Dragonpit. Below, you can see the ancient Roman amphitheater, the place where many of the key players held a summit meeting in the season 7 finale. Italica was the birthplace of three Roman emperors – Trajan, Hadrian, and possibly Theodosius. One of the earliest Roman settlements in Spain, it was founded in 206 BC by Publius Cornelius Scipius to house legionaries after the battle of Ilipa, which saw the Carthaginians (from North Africa) were defeated.

If you´re a true Game of Thrones megafan then Seville is the place to go. Experience the fantasy world but where winter is never coming! Voyager will make sure that you have an amazing stay in an amazing place.

Any entrance on the history and traditions of Seville and Spain would be comlpetly trivial without any mention of Flamenco. The Gypsy […]

Seville has a wide variety of cinemas all over the city, from the smaller and older cinemas to the enormous multiplex cinema […]