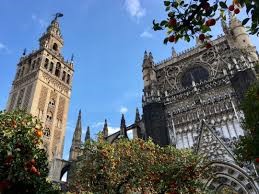 One theory as to how  oranges made their way to Seville is by the ancient Greek hero Hercules. In the Greek mythology it says that after Hercules had stolen some cattle as he had to cross the straight of Gibraltar to find a “Golden Apple” ( possibly an orange) which would provide him with immortality. Once finding the Golden Apple he crossed back to Spain before resting in Seville where he ate the Golden Apple. This is theory to how oranges now grow in Sevilla.

The other theory, which has been proven with facts, is that the oranges were brought to the city by Genoese sailors from Asia. Originally the trees were planted as a method to mask the smells of sewage on the streets as the bitter orange tree produces a fragrant oil. Due to the delicious smelling oil the Arabs would harvest the oil in order to create perfumes.

Other than in perfumes the oranges would be used in food and drink. Although the Sevillian orange is far too bitter to be eaten raw the fruit can be used in making things such as pastries and chocolates. The fruit can also be used as a flavouring in drinks such as cointreau and orange wine. Despite all this the Sevillian orange is probably most famous for its use in the production of British marmalade.

When a group of Scottish sailors came to the city to trade precious rocks they discovered the oranges and saw the marmalade. They liked it so much that they took it back home with them and showed it to the whole country. Even the royal family loved it! So from there a trade was established.

Why not come and see one of the many sights of Seville today here https://voyagerseville.com/en/ Don´t forget to look out for the oranges!

One of the most famous landmarks in Seville is the Giralda Tower. Since originally built in Moorish times, it received many alterations […]

In 1519, Ferdinand Megellan a Portuguese explorer travelled 42,000 miles with 5 ships and 270 crew members to discover the Western Sea […]